'As If They Were at Home With Me'

Like Alexander Smith (1829-1867), the Scottish poet and essayist, and I hope without too much whimsy, I have always personified certain books as friends. As a kid that meant Edgar Rice Burroughs, John Bunyan and Daniel Defoe – books whose presence was reassuring. Non-readers or readers who are strictly utilitarian will find it ridiculous, bordering on fetishism. Smith continues in “A Shelf in My Bookcase”: “With the volumes on the special shelf I have spoken of, I am quite at home, and I feel somehow as if they were at home with me.”

Like Smith, I don’t rank most special-shelf writers with Shakespeare and Milton, but only snobs claim to read undisputed masterpieces exclusively. I actually have several such shelves, all within easy reach of my desk. Here is part of the Yvor Winters & Co. shelf: 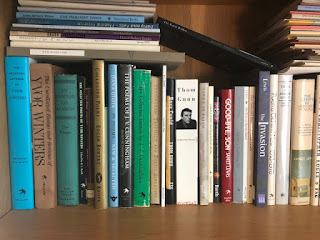 “A list of books that you reread is like a clearing in the forest: a level, clean, well-lighted place where you set down your burdens and set up your home, your identity, your concerns, your continuity in a world that is at best indifferent, at worst malign. Since you, the reader, are that hero of modern literature, the existential loner, the smallest denominator of moral force, it behooves you to take counsel, sustenance, and solace from the writers who have been writing about you these hundred or five hundred years, to sequester yourself with their books and read and reread them to get a fix on yourself and a purchase on the world that will, with luck, like the house in the clearing, last you for life.”

No Burroughs reader holds John Carter and Lord Gerystoke in exactly equal esteem; they all lean a little more towards one or the other. Were you a Barsoom or Africa man?