'Having Been Taught How to Find Things'

“Nobody anymore under the age of fifty has any education whatsoever.”

A rhetorical exaggeration, but still sobering. It’s tempting to assume ignorance metastasizes untreatably across generations, that the young are willfully blind to their inheritance. Many are, and have been taught by parents and teachers to scorn learning. But the opposite of ignorance is not a college degree but unconditional curiosity.  My essential education occurred not in classrooms but in libraries and wherever I happened to be reading a good book or listening to someone more knowledgeable than I.

The writer quoted above is Guy Davenport in a letter to James Laughlin on this date, April 6, in 1994. Davenport speaks from experience. Less than four years earlier he had retired from the University of Kentucky after teaching there for almost thirty years. He goes on in the letter:

“I get so tired of all this idealism in the universities about multiculturalism. As if they thought it up all of a sudden. Back in 1970 I gave a course in Herakleitos and the Dogon, for sophomores and juniors. Nobody on the faculty noticed, of course, and imagine we’ve never had multicultural studies until now. . . . (I don’t think I taught anybody anything.)” 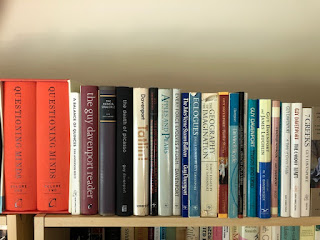 I know one exception to that final lament. Thanks to several years of correspondence with Davenport, my sole meeting with him at his home in Lexington, Ky., and most importantly my reading of his books, I can consider myself a reasonably well-educated man. Ultimately, all educated people are autodidacts. In the richest of his essays, “Finding” (The Geography of the Imagination, North Point Press, 1981), Davenport writes:

“ . . . I am grateful for the unintentional education of having been taught how to find things (all that I have ever done, I think, with texts and pictures).”

You say "unconditional curiosity," but does that curiosity extend to such things as the Standard Model, or group theory, or general relativity? These are a cultural inheritance every bit as precious as Montaigne or Milton, perhaps moreso, and yet somehow I doubt you would adduce ignorance of such matters as evidence of widespread cultural degeneration. It seems the elders of every age have always bemoaned the ignorance and impiety of their successors -- a view that lends itself to the notion that civilization is nothing but a ceaseless decline from some Edenic acme of the distant past. Such a view is, of course, absurdly myopic and anti-historical.

Montaigne and Milton have always been, and will ever be, elite pleasures, enjoyed by a relative few. That is, alas, the fate of all the best writers and thinkers. And yet, there are more people alive today who understand the intricacies of electronic structure and relativity, than ever understood such things before. How can it be said, then, that we lack education? It is an insult to scientists and engineers everywhere when so-called "humanists" make such categorical statements. Whence comes this derision for scientific culture and achievement?

I do not expect the vast majority of the civilized world to be conversant with Hartree-Fock theory or superfluidity. Nor would I expect them to have read the Aeneid in the original Latin. It is easy to look down one's nose at those who have not attained your own august level of learning, and much harder to accept that maybe, just maybe, not everyone shares your passions or values.