'Vanished Many a Summer Ago'

My nephew and I drove to the house in which I lived from 1955 to 1970 and where he lived briefly some thirty-five years later. Expecting to happily revisit the past is a fool’s errand, though I’ve learned that a streak of sentimentality festers inside of me. My brother sold the house a decade ago and the new owners trashed the interior and the yard. Squatters were living in the garage and the Christmas trees my brother and I planted more than half a century ago had been chopped down. Neighborhood gossip said the new owners were dealing dope out of the house in which my brother and I grew up. I remembered Robert Frost’s lines in “Ghost House”: “I dwell in a lonely house I know / That vanished many a summer ago.” No spot on Earth is so dense with memories.

Last week when driving past we saw a man working in the garage, so I stopped and introduced myself and asked if we could look around. He spoke heavily accented English, called someone on his phone and handed it to me. I saw Arabic script on screen. I told the man on the line – contractor? new owner? -- who I was and he said, “Sure. Take your time.” This is not the kind of trust and graciousness I expect in 2021, at least not in Cleveland. 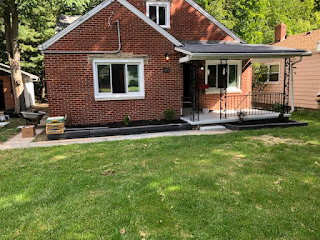 Someone has sunk a lot of money into renovating a house my parents never cared for very well. The roof is new. All the windows have been replaced. Someone has freshly mulched the flowerbeds. I couldn’t recognize the kitchen. Everything in it is new, including stove and refrigerator, and most of the walls in the house have been repainted. One mystery remains. In the basement, under the stairs, was a safe built into the wall. It had never been opened when we were kids and my father said he didn’t know the combination. Somehow we got the idea that the safe contained a pistol, which now sounds like boyhood mythologizing. This time the safe's door was open, exposing some flaked-off rust and nothing else. Where’s the gun?

Emotions are seldom unadulterated. Melancholy and disgust mingle with gratification that someone has reclaimed the house and preserved it for a new crop of memories. Eric Ormsby writes in “Childhood House” (Coastlines, 1992):

“Somehow I had assumed

That the past stood still, in perfected effigies of itself,

And that what we had once possessed remained our possession

Forever, and that at least the past, our past, our child-

Hood, waited, always available, at the touch of a nerve,

Did not deteriorate like the untended house of an

Aging mother, but stood in pristine perfection, as in

[To J.J. Stickney: Yes, the West Side. The house in which I grew up is in Parma Heights. I stayed with my brother, who lives on West 75th Street in Cleveland.]

Patrick,
We’re you on the west
side?