I don’t accumulate tchotchkes. My decor preference is monastique moderne. I dislike clutter in my surroundings and prose. One exception is a rusty, hexagonal chunk of iron about six inches across and weighing almost five pounds that I keep on a bookshelf. More than thirty years ago it was a gift from Tom Zimmie, a civil engineer at Rensselaer Polytechnic Institute (RPI) in Troy, N.Y. The nut comes from the Brooklyn Bridge and is a relic of the original structure dating from its opening in 1883. A century later, Zimmie was part of the engineering team that evaluated the structural integrity of the span Hart Crane called “steeled Cognizance.” I wrote a story about him and the project for my newspaper. 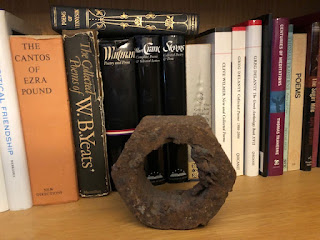 In 1835, RPI became the first school in the U.S. to issue a civil engineering degree. Almost fifty years later, Washington Roebling, RPI Class of 1857, realized his father’s vision of a bridge across the East River by becoming chief engineer of the Brooklyn Bridge -- then the longest suspension bridge in the world, much celebrated by Whitman and Crane. Nice to have a connection across time with John A. and Washington Roebling.

On this date, August 5, in 1967, Marianne Moore published a celebration of New York City, with emphasis on Brooklyn, her home since 1929, in the New York Times. The headline – “Crossing Brooklyn Bridge at Twilight” – acknowledges Whitman, an earlier resident of the borough. The opening sentence is typical of Moore’s eccentric precision:

“Assets tempt comparison, but I realize that my venerations are tinctured with materialism.”

Moore catalogs some of her favorite things about Brooklyn, including “high-school boys, my neighbors, [who] acquired out-of-date tennis technique from me, on the Fort Greene tennis courts, which are free.” Also, the Camperdown Elm in Prospect Park (laid out by Frederick Law Olmsted). And the departed Brooklyn Dodgers and the Brooklyn Daily Eagle (edited by Whitman in 1846-48). In a poem published in The New Yorker in 1966, “Granite and Steel,” Moore concludes:

as if inverted by French perspicacity

This is what I call brilliant association.