'I Read in the Hope of Discovering the Truth'

Pushed to reduce to a single word my feelings about books, I would probably say gratitude. A bookless life is unimaginable. I love music and good movies but among art forms --“entertainment options” – there’s no contest. As a result, I’m drawn to others with similarly bookish habits. I know a guy who reads while driving, the way some stare at their phones when stopped at a red light. A quick confession: that guy is me. Imagine my relief when I encountered this:

“When I leave my apartment, I take a book or magazine with me. If I am driving, more often than not I read at stoplights. If I lunch alone, I read while eating. If I need to go to the bank, I read while waiting in line. I am able to read while walking (Macaulay was the great champion at this). Most of the day, when not talking or being talked to, I am reading.”

Except for the part about walking (a cane and vertigo make that impractical), I could sign my name to that confession. It was good to learn I’m not alone. For people like us, the arrival of the bookish precincts of the blogosphere came as a refuge, a sanctuary where we might go about our business peacefully, like grownups. My naïveté soon dispelled.

The words of consolation quoted above come from Joseph Epstein’s essay “Bookless in Gaza,” collected in The Middle of My Tether (1983). Epstein is the master of taking subject matter (books, usually) judged esoteric in today’s culture and domesticating it. Anyone can read his essays and learn something. No training required. He retired from teaching two decades ago but for some of us he remains a teacher, one gifted with charm, good humor and a pleasing prose style. Later in the same essay he asks: “Allow me my major premise for a moment: if there is a Heaven, will it contain books?”

For Señor Borges, the answer was a resoundingly grateful Si! For Epstein: “[I]f there are no books  in Heaven, then – as John Sparrow once remarked of Heaven if his dear friend Maurice Bowra were not there – I do not care to go. My own view is that there will be books in Heaven, but only in foreign languages, ancient and modern and even lost, all of which I shall be able to read with perfect ease.”

In 2000, five years after the death of his formidably well-read friend Edward Shils, Epstein published in First Things the only poem of his I have ever read, “Edward Shils in Heaven.” In it he asks: “Are there good books and journals in the place for you to read?” A Heaven without books sounds like a shoddy, low-rent Heaven, like a cheap motel. 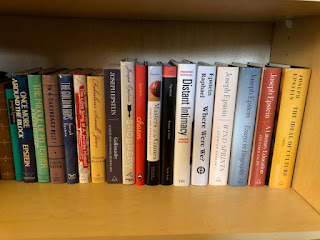 Those who pigeonhole Epstein as a political pundit are mistaken. Last month, after he published a mild little spoof of the incoming first lady, he was pilloried by the usual mob. For most people today, of course, politics is merely one more excuse for wanting to get angry about nothing. In the introduction to his most recent book, Gallimaufry: A Collection of Essays, Reviews, Bits (2020), Epstein writes:

“In so heatedly political an atmosphere as ours, one cannot avoid engaging with politics, at least not entirely. Still, as a man without a theory of government, or strong opinions on foreign policy, or much in the way of knowledge about economics, I continue to prefer to believe that I am only political enough to protect myself from the politics of others.”

Amen. Now back to something infinitely more interesting and important – books. Later in “Bookless in Gaza,” Epstein says he holds “what many may consider to be a philistine assumption: that everyone dies some day.” He endorses Montaigne’s notion that “we must be always booted and ready to go, so far as it is in our power.” Epstein likes “booted” and says that for him it “includes being as well read as possible.” No argument there. Tolstoy died with Montaigne’s Essais on his bedside table (along with The Brothers Karamazov). The essay continues:

“And now a philistine confession to go with a philistine assumption: I read in the hope of discovering the truth, or at least some truths.  I look for truth in what some might deem strange places: novels and poems, histories and memoirs, biographies and autobiographies, letters and diaries.

“. . .  I seek clues that might explain life’s oddities, that might light up the dark corners of existence a little, that might correct foolish ideas that I have come to hold too dearly, that might, finally, make my own stay here on earth more interesting, if not necessarily more pleasant.”

He is our ambassador, perhaps the last, to what sometimes seems like a homeland rapidly disappearing over the horizon: the glories of Western civilization, literature in particular. Epstein was born on this date, January 9, in 1937. Happy birthday, Mr. Epstein.

May I join in wishing you happy birthday, Mr. Epstein; and a fine how do you do.

I have a similarly arranged bookshelf in my library. Mr. Epstein's brought me immeasurable pleasure over the years and done a lot to broaden my reading habits. A very happy birthday to him.