'The Old Dogs Now Are Dead'

Hanging on the wall in R.L. Barth’s office are three framed pictures that formerly hung in the Stanford office of Yvor Winters. One is the oil painting that inspired his 1938 poem “On the Portrait of a Scholar of the Italian Renaissance.” Bob writes in his accompanying email, “As for the Renaissance prince, I've always thought he looks more like a mafioso”: 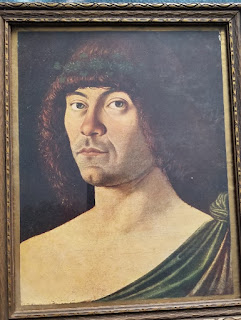 Another is a photograph of the Kentucky-born novelist and poet Elizabeth Madox Roberts. Winters met her at the University of Chicago in 1917-18, when both were members of its Poetry Club along with Glenway Westcott, Monroe Wheeler and  Maurice Lesemann. Roberts dedicated her first and best-known novel (and the only one I have read), The Time of Man (1926), to Winters and his poet-novelist wife Janet Lewis. In a 1920 letter to Westcott, Winters writes: “Elizabeth's poems look better than ever in print. She, too, is literature--the quality of tempered steel.” Though in a 1930 letter to Lincoln Kirstein he trashes a later Roberts novel, The Great Meadow: "Such are the fruits of sentimentalism." 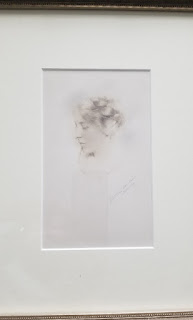 At the bottom of the third picture is written in Winters’ hand, “Champion Buckthorn Sal.” Winters raised and showed Airedales. 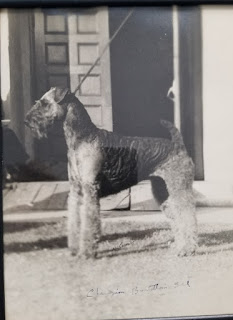 Here is Winters’ “Elegy on a Young Airedale Bitch Lost Some Years Since in the Salt-Marsh” (Before Disaster, 1934):

“Low to the water's edge

You plunged; the tangled herb

Locked feet and mouth, a curb

Tough with the salty sedge.

“Half dog and half a child,

Sprung from that roaming bitch,

You flung through dike and ditch,

Betrayed by what is wild.

“The old dogs now are dead,

Tired with the hunt and cold,

Sunk in the earth and old.

But your bewildered head,

“Led by what heron cry,

Lies by what tidal stream?--

And cast ashore to dry.”

That Winters loved his dogs is inarguable and probably irrelevant. He is writing a poem, not telling us how much he loved his young Airedale bitch. The poem’s operative phrase is “Betrayed by what is wild.” Beware of what is wild, in nature and in poetry. I find Winters among the most emotionally rich of modern poets precisely because he mediates emotional expression, transmutes it and makes it memorable through form.