'Eighth Book from the Left'

Steve Allen would invite three audience members to the stage and ask each to strike a single key on his piano keyboard. He would take the three notes and improvise a melody, complete with harmonies and rhythm. It was impressive to us non-musicians and mundane to experienced jazz musicians, for whom improvisation is part of the job description. In a related bit, Allen would take photographs of power lines on which birds were perched, treat the birds and lines as notes on a musical staff and, once again, improvise. What John Cage pretentiously dubbed “aleatoric music” – relying on chance as an element in musical composition -- Allen treated as a parlor game.

A reader has alerted me to someone on Twitter posing a similar stunt: “Pick any bookcase in your house. Bottom shelf. Eighth book from the left. What is it?” I draw no grand conclusions from the results. My motive is idle curiosity. 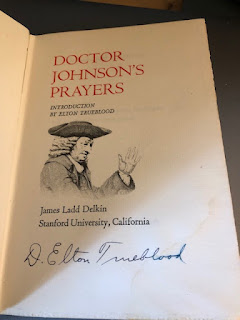 he bottom shelf of the bookcase immediately to the left of my desk is devoted exclusively to books by and about Dr. Johnson. The eighth volume from the left is Doctor Johnson’s Prayers (1945), with an introduction by Elton Trueblood, the Quaker theologian. The book comes from the library of the late poet Helen Pinkerton and was given to me by her daughter Erica Light. It carries a cluster of associations. Trueblood lived for much of his life in Richmond, Ind., including the two years I worked there as a reporter for the city’s newspaper. He taught at Earlham College, which I relied on for its library. Erica tells me the volume was a gift from Helen’s old friend Walter Martin, the former Palo Alto, Calif., book dealer and Baudelaire translator. I subsequently learned Flannery O’Connor had a copy of Doctor Johnson’s Prayers in her personal library.

In another bookcase in my office, the eighth book from the left on the bottom shelf is a paperback copy of Henry James’ Daisy Miller. On others: Henry Roth’s Call It Sleep (1934), Ernest B. Furgurson’s Chancellorsville 1863 (1992), Whitney Balliett’s New York Voices: Fourteen Portraits (2006), The Poems of Basil Bunting (2016).

Bonus fact: Richmond, Indiana is also the hometown of the (now retired) American composer Ned Rorem who, if he makes it to October 23, will be 99 years old this year.

Random shelf, eight books in: "Memoirs of Prince von Bulow: Volume 2: From the Morocco Crisis to Resignation, 1903-1909," translated from the German by Geoffrey Dunlop (1931).

Bookcase to my left: All my own manuscripts [because the binders are too long for a 1' high shelf]
Bookcase to my right: THE IMAGE OF WAR, 1861-1865, Vol. 2
Andrew Reinbach

Strong's Bible Concordance. Strong's, Young's, and Cruden's were probably the three concordances most commonly encountered in relatively recent but pre-personal computer days. The saying was: Young's for the young, Strong's for the strong, and...

My first full concordance was a Cruden's, which was quite serviceable. Cruden seems to have been a man of astonishing application, and an eccentric.